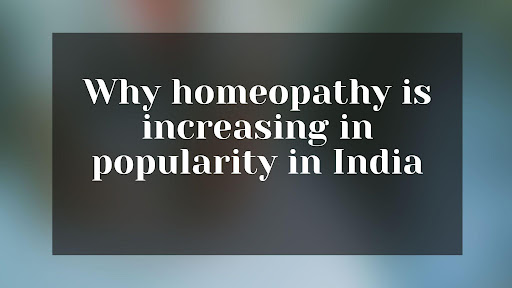 Why homeopathy is increasing in popularity in India

You may witness a rapid growth of homeopathy in India. People are now familiar with homeopathy and it’s usage. It is considered to be a substitute of allopathy and ayurveda.

As per the latest guidelines of AYUSH Ministry homeopathy is now widely preferred upon allopathy and ayurveda as it has many beneficial characteristics.

It is a completely natural medicine that is made of non-addictive and non-toxic substances which are harmless to the human body. People who are not satisfied with conventional medicine are now switching towards homeopathy.

The origins of homeopathy were found in the 18th century and it gained immense popularity in the 19th century. This alternative medicine came out of Europe and was created by Samuel Hahnemann as he believed that the conventional medicines were ineffective and often harmful. He advocated that use of a single drug at lower doses can cure diseases relevently.

Increasing Popularity of Homeopathy in India

The concept of homeopathy was denied by many researchers as it has lack of scientific evidence and efficacy. It had bases of questions about it’s effects and preparations since the 19th century.

The concept has gone through many critics but then too it stands as one of the relevant medication methods. The reason behind its popularity is that it is more affordable and human-friendly as compared to the western medicines.

Indian government recognizes homeopathy as one of the national systems of medicines established by the Department of Ayurveda, Yoga and Naturopathy, Unanai, Siddha and Homeopathy (AYUSH) under the Ministry of Health and Family Welfare.

There are a number of homeopathic colleges in India that provide degrees to postgraduate and undergraduate students who are willing to learn homeopathy. In India people prefer more for homeopathy as it is safe to use and has no side-effects.

It is increasing in popularity in India as it is natural and suitable for all age groups with less dosage. The profession is practiced worldwide and its practitioners are known as homeopaths.

They rely on pseudoscientific methods and believe that a substance causing disease in healthy and sick people can be cured with the help of homeopathic dilutions given at regular time intervals.

Reasons behind its Popularity

Homeopathy is now considered as one of the best alternatives to allopathy and ayurveda due to its reliable characteristics. Here are some of the major characteristics that are the reasons behind its popularity.

The topmost reason behind its admiration is that it is completely natural and safe. The preparation of these medicines are done using animal, plant and mineral substances without using any toxic and addictive drugs.

Different dilutions are extracted from different substances and they are poured on the small white pills which are let to evaporate and set for sometime and then are taken in use.

As homeopathic medicines are made from natural substances, they have no side-effects. You just need to take it in the right quantity and at the right time as prescribed by the homeopath.

It is very rare to get swelling, itching or rashes as no use of steroids is done in making the medicine. If you get any allergies or other effects then do consult the physician before taking the next dose. Mostly, it doesn’t have any.

Homeopathy finds out the root cause of disease and cures it completely from the tip. The homeopath will first consult you and discover all your symptoms and then treat it accordingly.

The consultation period may be of fifteen minutes or it may last upto an hour depending upon the medical history. Homeopathy for skin disorders, homeopathy for autism and homeopathy for certain other diseases can be cured in a decent way.

You are not required to undergo the painful surgeries when you are willing to cure the disease. The concept always prefers to cure it naturally. The practitioners attempt to match a single preparation with certain symptoms and prescribes to take it twice or thrice in a day. It does not affect the symptoms immediately but you will surely see the results in five to seven days. This reason also makes homeopathy popular among people.

The homeopathic medicines are lesser in dosage and are available in different forms. You will get them in pill form, powdered form, tablet form and liquid form depending upon your ailment and symptoms.

The shape, color and size of pills and powder are the same and only different dilutions are poured above the pills that contain substances of minerals and medicinal values used to overcome the disorders.

There are many more points that make the method convenient and suitable for people and nature as well. The medicines are made from all the natural substances available from nature and therefore they are environment-friendly and do not harm nature at all. It is also considered that the homeopathic pills give a better immunity to your body. It makes the body function properly and works as a fast-aid.

The use of homeopathy is concluded worldwide. It is fairly common in some countries and uncommon in others. Professional qualifications and licenses are required for homeopathy in certain countries.

The colleges and universities run under the private sectors or they are eligible under the government authorisation. Homeopaths are awarded with Bachelors of Homeopathy Medicine and Surgery (BHMS) once they complete the practice.

Choosing homeopathy has always been a question as it lacks in the scientific provings and evidences but the higher ability of curing the diseases has made it more appropriate to use.

As India largely believes in natural remedies rather than the conventional medicines, homeopathy has been one of the most desirable choices of people for every minor and major problem.

By Vikash Kumar
WPC2021 Introduction of WPC2021: Are you looking to watch the live matches on the live…
END_OF_DOCUMENT_TOKEN_TO_BE_REPLACED
14
0
Share
Finance

By Vikash Kumar
What is Vegamovies? Vegamovies is the latest platform that enables the users to live stream or…
END_OF_DOCUMENT_TOKEN_TO_BE_REPLACED
32
0
Share