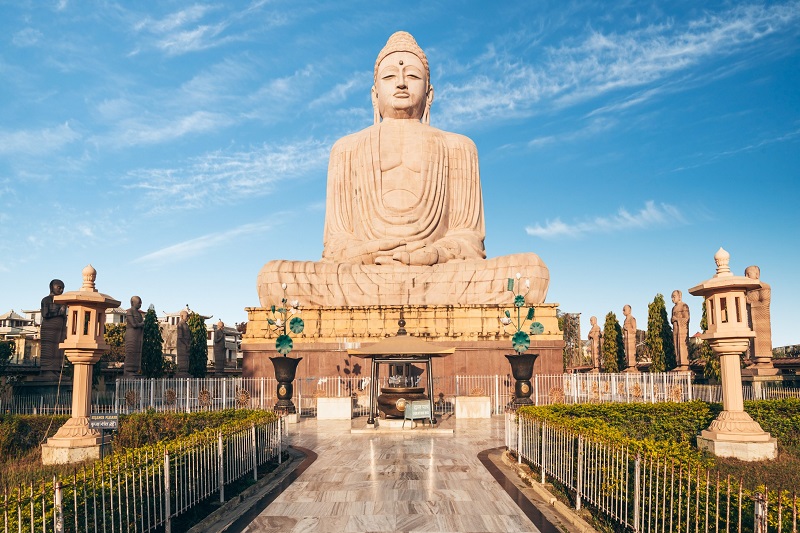 As the fourth largest religion in the world, the influence of Buddhism (a religion that originated in India) is widespread. India, the holy land where Gautama Buddha spent most of his life, attained enlightenment, and started preaching Buddhism is one of the best places to travel to for a Buddhist Pilgrimage tour. The famous Buddhist places in India are a mix of the pious places of worshipping Buddha and the sacred sites where significant events in the life of Gautama Buddha took place. From the park where he first started preaching his teachings to the place where breathed his last, here are the top 5 Buddhist places in India you must visit for a deeper understanding of Buddha and his principles.

A list of the best Buddhist places in India is incomplete if it doesn’t mention Bodh Gaya. This is the holy place where Gautama Buddha gained enlightenment while sitting under a large Peepal tree that became famous as the Bodhi tree. Located about 110 km from Patna, the Gaya district is home to the Mahabodhi Temple complex, a popular pilgrimage site for Buddhists across the world.

The most popular attractions of this complex (also a UNESCO World Heritage Site) include the Bodhi tree, the Mahabodhi Stupa (an 80 feet tall statue of the Buddha in a deep meditation posture), Vajrasana (the diamond throne), a lotus pond, a meditation garden, and its many monasteries.

One of the four sacred Buddhist pilgrimage destinations in the world, Sarnath is famous as the place where Buddha gave his first sermon after having attained enlightenment. Situated at a distance of around 11-13 km from the ancient city of Varanasi, Sarnath is visited by thousands of devotees interested in Buddhist philosophy. The deer park at Sarnath is where Budhha first taught the four noble truths and it marks the beginning of Buddha’s valuable preachings.

Emperor Ashoka had a lot of memorials built at this historic site. Some of the famous structures include Chaukhandi Stupa, Dhamek Stupa, Dharmarajika Stupa, and Mulagandha Kuti Vihar. Do check out the ancient Buddhist relics at the Archaeological Museum during your exploration of the place.

Three of the world’s four sacred Buddhist pilgrimage destinations are situated in India, and Kushinagar is one of them. Buddha left the earthly body and attained Mahaparinirvana – the highest stage of salvation – here at this small town in UP, situated about 53 km from Gorakhpur. The Mahaparinirvana Temple featuring a six meters long Buddha statue in a reclining position is among the most-visited Buddhist places in India. This reclining nirvana statue made of monolith red sandstone represents the dying Buddha. Nearby is a 50 meters tall Ramabhar Stupa, built at the spot where the Buddha was cremated. A few more places of prominence include Nirvana Chaitya and Matha Kuar Shrine among other temples.

Sanchi, known for its Buddhist stupas dating back to the 3rd century BC, is one of the best Buddhist places in India. The Great Stupa that sits on top of a hill and whose construction was commissioned by Emperor Ashoka is the most famous of them all. This famous monument (recognized as a World Heritage Site by UNESCO) houses several important relics of Buddha, and its architecture is considered an example of the evolution of Buddhist architecture in Madhya Pradesh. Sanchi’s Ashoka Pillar, ornate Thoranas or gateways carved in great detail, and monasteries are popular too, other than its Buddhist monuments.

Sravasti, an ancient town where the Buddha lived for 24 years, is filled with places of interest for Buddhists. This capital of ancient Kosala Mahajanapada used to be one of the six largest cities in India during the Buddha’s lifetime. Sravasti boasts some of the age-old stupas, monasteries, and temples that existed in the Buddha’s times, thus attracting thousands of pilgrims from across the globe to tour its holy land. One can learn a lot about Buddha’s life and his preaching by exploring the ancient remains dotting this town. A few of the must-visit attractions in Sravasti are Sahet, Mahet, Jetavana Monastery, and Pakki Kutti. Interestingly, Sravasti holds a special significance for Hindus, Jains, and Buddhists alike.

Now that you know about the most famous Buddhist places in India, it’s time to get started on your Buddhist pilgrimage tour of India. Have your flight tickets booked with Indian Eagle and get benefitted from the exclusive deals on flights to India besides earning reward points.

By Grace
Orange is a small town bordering New Haven, Connecticut. It is widely considered to be one of the…
END_OF_DOCUMENT_TOKEN_TO_BE_REPLACED
42
0
Share
Travel

By Grace
Top Destinations For Group Holidays on a Student Budget, Student life is all about new experiences…
END_OF_DOCUMENT_TOKEN_TO_BE_REPLACED
122
0
Share
Travel